Psilocybin is a naturally occurring psychedelic compound found in fungi. Often referred to as magic mushrooms, the fungi has a centuries-old history of use by cultures across the world for healing and spiritual or religious experience, and in recent years has found a place in modern medicine and therapeutics. So what’s it all about?

Mushrooms were largely associated with the counterculture of the 1960s, where it became stigmatized as a psychedelic drug and subsequently labeled as a Schedule 1 substance by the FDA, therefore roadblocking research. While this delayed the advancement of psilocybin in modern medicine, changes in culture and policy have opened the doors for legalization of the substance for psychedelic therapy.

See the Historical Timeline of Psychedelic Substances below: 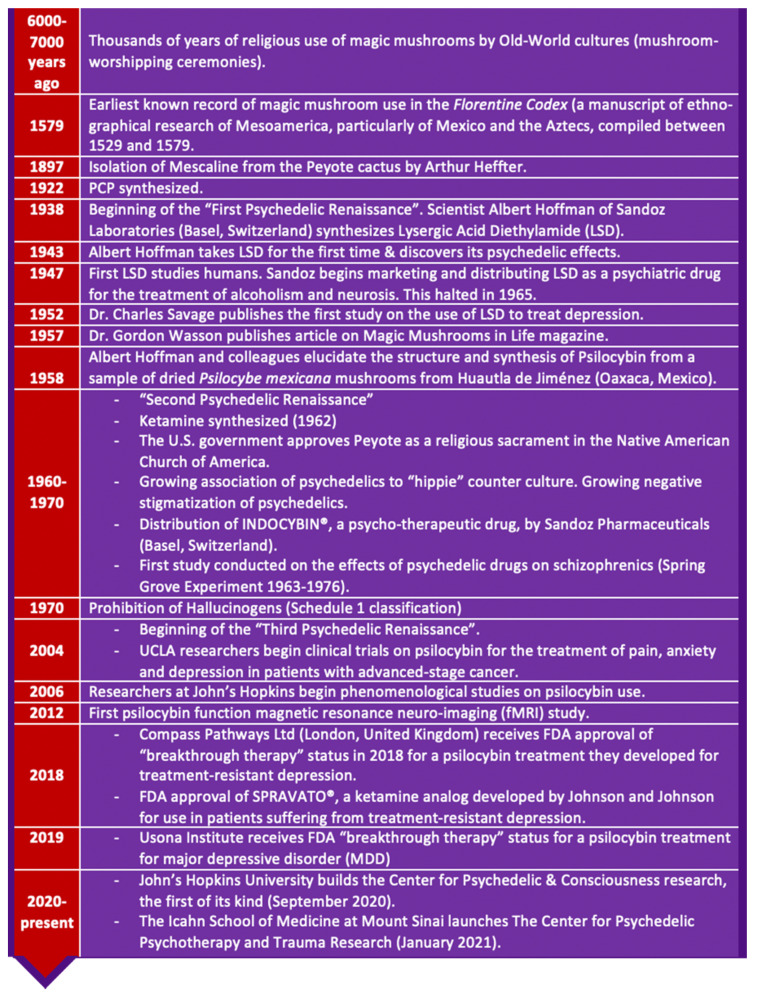 Psilocybin can incite intense feelings of wonder, enhance awareness, alter perception of time, and cause profound changes to thought patterns & consciousness. Timothy Leary, American psychologist, psychedelic advocate, and counterculture icon, believed it led to a higher level of consciousness, stating, “I learned more about psychology in the five hours after taking these mushrooms than in the preceding fifteen years of studying and doing research in psychology.”

Psilocybin activates serotonin receptors and affects mood, cognition and perception, as well as arousal and panic responses. While it doesn’t always cause hallucinations, it can alter people’s perception of their environment. Additionally, “The quantity of the drug a person consumes, their past experiences, and their expectations of how the experience will take shape can all impact the effects of psilocybin. The hallucinogenic effects of psilocybin usually occur within 30 minutes after a person ingests it and last 4–6 hours. In some individuals, changes in sensory perception and thought patterns can last for several days.” (Medical News Today)

Studies have shown that psilocybin causes significant changes in brain dynamics and functional connectivity (FC) between areas of the brain, which may help explain why, when used in therapy, it can contribute to long lasting effects. (Lowe, et al)

Other possible effects include:

Click here to learn more about the risks associated with psilocybin.

What is Psilocybin Therapy?

During a psilocybin psychotherapy session, a patient ingests psilocybin and experiences a 6 – 8 hour journey while in the care of a trained therapist who helps facilitate the experience. Prior to and after the psychedelic session, the patient engages in standard talk therapy to prep for and then unpack the experience.

Psilocybin therapy has been shown to have positive effects on those suffering from a chronic illness, depression, anxiety, PTSD, eating disorders, and more. (Resnick) The goal of this treatment is to overcome emotional / mental obstacles, which tends to happen in an expedited manner as the psychedelic induces changes in attitudes and beliefs.

In general, the findings of various studies have pointed to the following benefits of psilocybin therapy:
● Reduced rates of depression
● Chronic depression moving into remission
● Lowered levels of anxiety
● Improved mood
● Less fear of the future
● Increased sense of spirituality and connection
● Enhanced quality of life

Looking to the Future

Psilocybin-assisted treatment may have enormous potential in psychiatric medicine and shows promise for treating a range of addictions and mental health disorders. In 2020, Johns Hopkins Medicine was the first federal grant recipient for psychedelic treatment research awarded in 50 years, whose upcoming studies “will determine the effectiveness of psilocybin as a new therapy for opioid addiction, Alzheimer’s disease, post-traumatic stress disorder (PTSD), post-treatment Lyme disease syndrome (formerly known as chronic Lyme disease), anorexia nervosa, and alcohol use in people with major depression.”

With the potential to treat an expansive range of conditions, magic mushrooms are in no doubt living up to their name and ushering in a world of new possibilities within modern medicine.

Want to learn more? Check out the following videos and articles:
● Psilocybin Could be a Therapeutic Breakthrough For Addiction
● The Neuroscience of Psychedelic Drugs, Music, and Nostalgia
● Psilocybin Treatment for Major Depression Effective for Up to a Year for Most Patients, Study
Shows
● How ecstasy and psilocybin are shaking up psychiatry